Malhar – A Rhythm of Antiquity – an article by Saurabh

Introduction – Malhar is an ancient town of Chhattisgarh and it could be the oldest one probably. J D Beglar mentions about a mud fort at Malhar during his tour in 1873-74. He was not very much interested in such a fort so he skipped visiting Malhar however later he found about the ruins of two temples at this town. Malhar is referred as Mallala or Mallala-pattana in the Kalchuri epigraphs of the twelfth century CE. K D Bajpai suggests that Mallal is probably a derivation of Mallari, a title of Shiva. A demon named Malla is found in the Puranas, as Shiva killed this demon so he is called Mallari. Old Mallal was surrounded by three rivers, Arpa in the west, Leelagar in the east and Shivnath in the south.

Malhar lies on an ancient route which was connecting Koshambi with Puri on the south-eastern coast of India. Bharhut, Bandhavgarh, Amarkantak, Kharod, Malhar, Sirpur are few major towns on this route. Malhar was benefited with this strategic location and witnessed cultural and political developments. Pilgrims going to Puri used to halt here and pay homage to various temples at the site. A clay seal bearing legend ‘gamasa Kosaliya’ meaning ‘of village Kosala’ discovered at Malhar can be dated to 200 CE. K D Bajpai identifies this village Kosala with a village bearing same name situated near Malhar.

Another clay seal bearing the legend ‘Maharaja Mahendrasya’ is an important discovery at Malhar. This legend is written in the Gupta Brahmi alphabets. K D Bajpai identifies this Mahendra with the ruler bearing the same name which found a mention in the Allahabad Pillar Inscription of Samudragupta. He is mentioned as the king of Kosala who was defeated in the hands of the Samudragupta but was reinstated after this defeat by the same ruler.

Though nothing can be said with surety about the Maurya occupation over Dakshina Kosala and hence over Malhar however as most of India was under their rule so it will be very hard to keep this region outside of their influence. After the Mauryas, Malhar came under the Satavahana rule which lasted for about three hundred years as mentioned by K D Bajpai. Various findings during the excavation also point towards this fact. The Vakatakas and the Guptas also enjoyed rule over this region as evident from their epigraphs. After their fall, local dynasties like the Sarabhapuriyas, the Panduvamshi of Mekala, The Panduvamshis of Kosala and the Somavamshis ruled over Malhar and a major part of Dakshina Kosala. The Kalchuris ousted the Somavamshis and ruled for about seven hundred years from Ratanpur till the advent of the Marathas in this region. 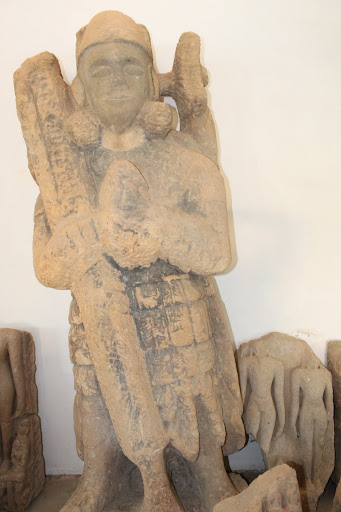 As per L S Nigam, it is here where the art activities started first. He mentions that Malhar is one of the most important centers of art where art-activities can be observed from second century BCE to the Kalchuri age. A Chaturbhuja-Vishnu image, discovered here in 1960, bears a Prakrit inscription in Brahmi script which is assignable to 200 BC. This is probably the earliest plastic representation of Vishnu.

Excavations at Malhar – In 1973-74, I K Sharma of the South–eastern Circle of the Survey noticed the antiquity of Malhar which was already famous for its sculptural wealth and a fort by that time. An extensive excavation work was taken up by The Department of Ancient Indian History, Culture and Archaeology of the Sagar University, in collaboration with The Department of Archaeology, Government of Madhya Pradesh, under the direction of Prof K D Bajpai, assisted by Dr S K Pandey and V D Jha in 1974-75-76

The excavations at Malhar show continuous inhabitation and antiquity from the second century BCE to twelfth century CE based upon the discovered sculptural specimens. During this period, Malhar observed various religious domination like that of the Buddhist, Brahmanical and Jaina. Various copper, lead, and potin coins bearing several symbols like elephant, Ujjain-symbol, peacock and Kartikeya were discovered at Malhar. All these coins may be assigned to pre-Christian era. Few silver punch-marked coins were discovered from the area around the fort.

Dr S K Pandey continued the excavations in 1977-78 which resulted in findings of structural activities during the Satavahana period. Apart from this nothing new as such was discovered except few structures dated to Gupta and post-Gupta period. A P Sagar collected various antiquities such as tools dated to Lower Paleolithic and Mesolithic period, terracotta figurine of naga-mithuna and other objects belonging to the Mauryan period in 1976-77 from Malhar. A stone, seal of hematite, bearing legend ‘Padma Nabhasa’ (probably for Padmanabhasya) was discovered by M U M Rao in 1983-84.

Is Malhar the ancient Kushavati? – When we talk about the ancient towns of Dakshina Kosala region, then Kushavati appears to be the most ancient. Rama coronated his son, Kush, at the throne of Dakshina Kosala with Kushavati as its capital. Though Kushavati is known since Ramayana time however its identification is still not done satisfactorily. This Kushavati should be looked on the southern side of Vindhya mountain range as told by Ramayana of Valkimi and Raghuvamsha of Kalidasa. There was an attempt to identify Kushavati with Kushasthali or modern Dwarka however it is not tenable on various counts.

V Pathak attempts to identify Kushavati with Kushinara or Kushinagara however apart from the similarity of the names there is no other proof in support of this identification. However there is no doubt about the antiquity of Kushinara. As Kosala was referred on Dakshinapatha in the Allahabad Pillar Inscription of Samudragupta, so Kushavati should be searched in Dakshinapatha region, the region lying beyond the Vindhya mountains on south.

Is Malhar the ancient Sarabhapura (शरभपुर)? – With the advent of the Sarabhapuriyas, in the beginning of the sixth century CE, in the Dakshina Kosala, Sarabhapura emerged as a major town and the capital of this dynasty. Later they changed their capital to Sripura (Sirpur) in during the time of the last ruler of the dynasty. Sarabhapura is still not identified with success. K D Bajpai and S K Pandey, who carried out extensive excavations at Malhar, propose it to be identified with Sarabhapura.

They proposed following points in support of their theory:

Satish Chandra also identifies Malhar with Sarabhapura however he went little far stating that Malhar was also known as Ratanpura during the Kalchuri dynasty.

Ajay Mitra Shastri does not agree with this identification, he puts forward following points in his support.

But, where is the evidence that Sarabhapura was founded by Sarabha? Nothing like that is mentioned in any Sarabhapuriya inscription, but it is just an assumption upon etymological surmise. Hence it cannot be used against Malhar’s claim as suggested by Bajpai. There is a possibility that Sarabhapura is just a new name given to an old town. However, it is a fact that Malhar was never mentioned as Sarabhapura but as Mallala or Mallala-pattana. But these names found mention in the Kalchuri epigraphs of twelfth century CE. Unfortunately, we do not have any record of sixth century where mention of Malhar as Malhar or similar name.

General Epigraphs – This section gives details on various epigraphs which are not associated to a particular monument but discovered at Malhar.

Monuments – There are two temples and a mud fort at Malhar. 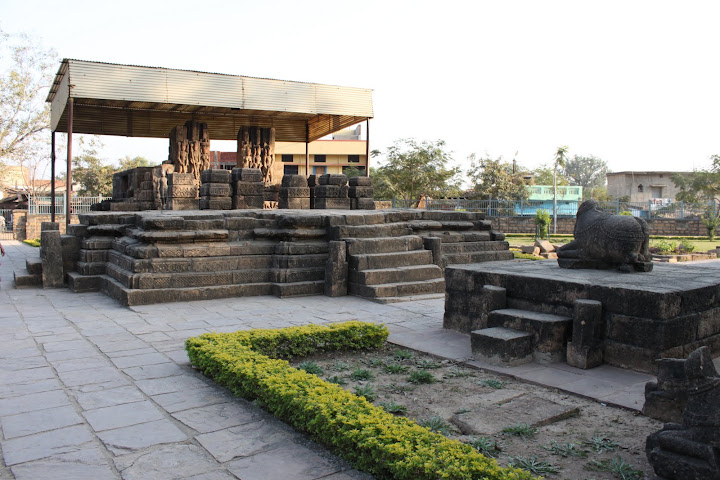 Pataleshvara Temple – This is the main attraction at Malhar and the complex is under the protection of the Archaeological Survey of India. The temple saw a major renovation and repair activities during the last decade of the twentieth century CE. The sanctum is located below the ground floor hence the name Pataleshvar (the lord of the netherworld). The temple is constructed on a high raised platform with entrances provided from three side. There would have been a pillared mandapa in front of sanctum as evident from the remains of various pillars. 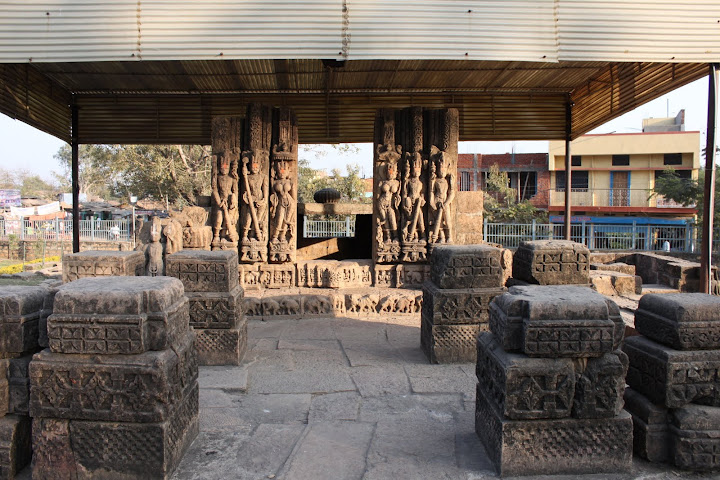 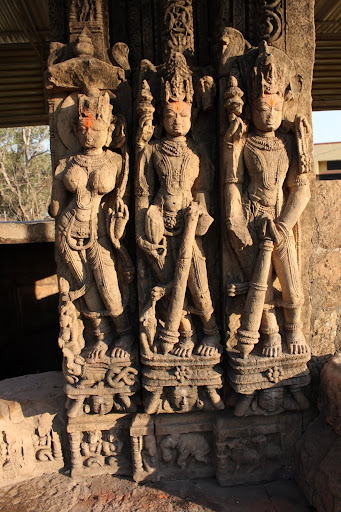 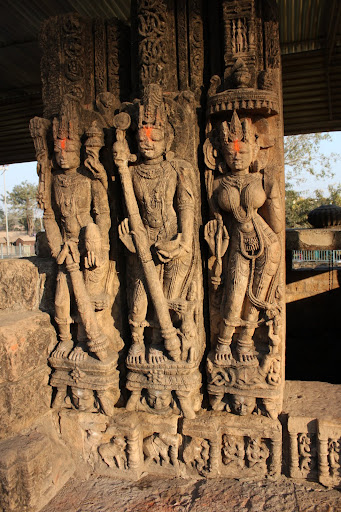 The sanctum doorway has life-size statues of the river goddesses and dvarpalas. Lateral faces of the door-jambs are carved with five panels each. Depiction of Ganesha, various Shiva-Parvati scenes and few secular scenes are found in these panels. Antarala (vestibule) has a staircase which takes the devotee down to the sanctum. There is a Shiva-lingam inside the sanctum. An open Nandi mandapa is constructed in front of this temple. 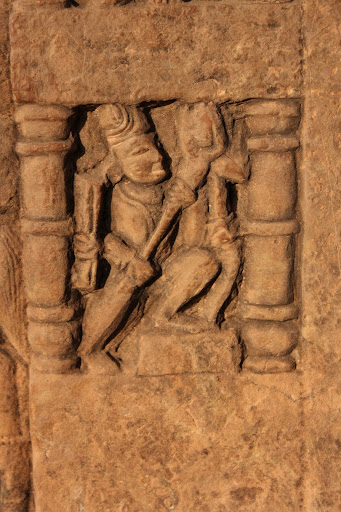 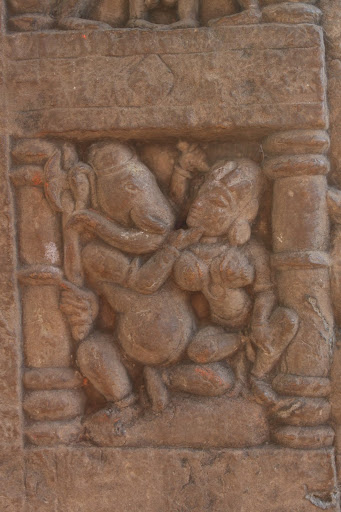 Ganesha with his consort 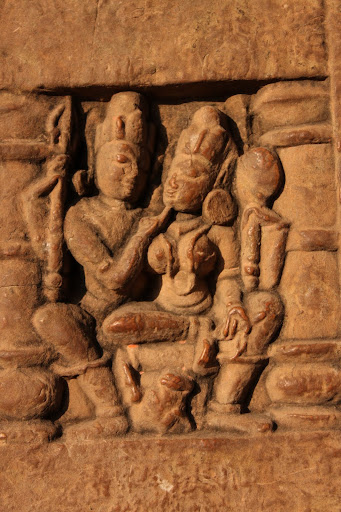 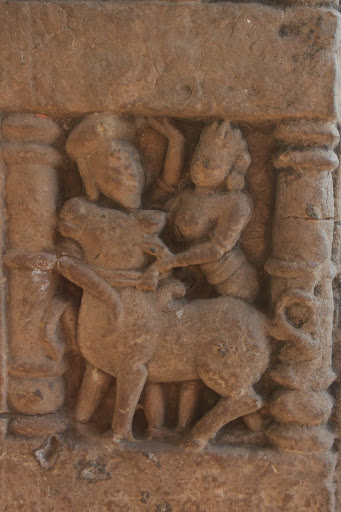 The temple was probably constructed by a Brahmana during the time of the Kalchuri ruler Jajalladeva II in the twelfth century CE. The temple was dedicated to Kedara, a title of Shiva. A sculptural shed was constructed in 1974-75 at the site to house various unearthed sculptures around the village. In 1981-82, around five hundred loose sculptures were chemically cleaned applying a coat of polyvinyl acetate as preservative, santobrite and zinc silicofluoride as fungicides. 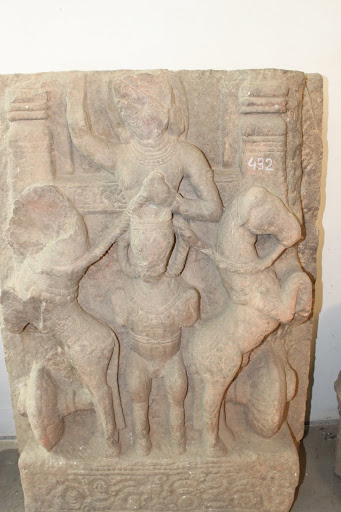 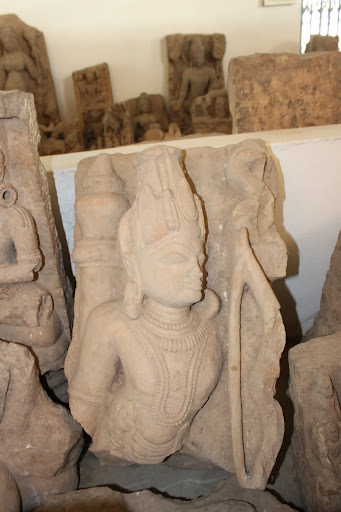 Bhima Kichaka Temple – This temple was found in ruins, ASI did some renovation and all the stones were put in place. It is dedicated to Shiva and does not have any mandapa in front. I did not visit this temple so cannot provide any photographs.

Mud Fort – I was not aware of its existence when I visited Malhar but later I found that there is such a fort and it is under the protection of ASI.

How to change your passion to business through eMalhar.com